In the first year of Belshazzar king of Babylon Daniel had a dream and visions of his head on his bed. Then he wrote the dream and told the sum of the matters.  Daniel spoke and said, “I saw in my vision by night, and, behold, the four winds of the sky broke out on the great sea.  Four great animals came up from the sea, different from one another. 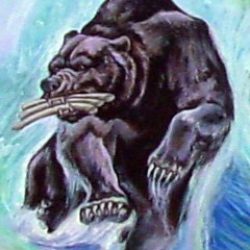 “Behold, there was another animal, a second, like a bear. It was raised up on one side, and three ribs were in its mouth between its teeth. They said this to it: ‘Arise! Devour much flesh!’ 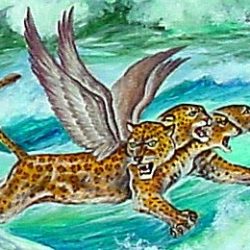 “After this I saw, and behold, another, like a leopard, which had on its back four wings of a bird. The animal also had four heads; and dominion was given to it.

“After this I saw in the night visions, and, behold, there was a fourth animal, awesome and powerful, and exceedingly strong. It had great iron teeth. It devoured and broke in pieces, and stamped the residue with its feet. It was different than all the animals that were before it. It had ten horns.  “I considered the horns, and behold, there came up among them another horn, a little one, before which three of the first horns were plucked up by the roots: and behold, in this horn were eyes like the eyes of a man, and a mouth speaking great things.

“I watched until thrones were placed, and one who was ancient of days sat. His clothing was white as snow, and the hair of his head like pure wool. His throne was fiery flames, and its wheels burning fire.   A fiery stream issued and came out from before him. Thousands of thousands ministered to him. Ten thousand times ten thousand stood before him. The judgment was set. The books were opened.   “I watched at that time because of the voice of the great words which the horn spoke. I watched even until the animal was slain, and its body destroyed, and it was given to be burned with fire.   As for the rest of the animals, their dominion was taken away; yet their lives were prolonged for a season and a time.   “I saw in the night visions, and behold, there came with the clouds of the sky one like a son of man, and he came even to the ancient of days, and they brought him near before him.   Dominion was given him, and glory, and a kingdom, that all the peoples, nations, and languages should serve him. His dominion is an everlasting dominion, which will not pass away, and his kingdom that which will not be destroyed.

“As for me, Daniel, my spirit was grieved within my body, and the visions of my head troubled me.  I came near to one of those who stood by, and asked him the truth concerning all this. “So he told me, and made me know the interpretation of the things.  ‘These great animals, which are four, are four kings, who will arise out of the earth.   But the saints of the Most High will receive the kingdom, and possess the kingdom forever, even forever and ever.’

“Then I desired to know the truth concerning the fourth animal, which was different than all of them, exceedingly terrible, whose teeth were of iron, and its nails of brass; which devoured, broke in pieces, and stamped the residue with its feet;  and concerning the ten horns that were on its head, and the other horn which came up, and before which three fell, even that horn that had eyes, and a mouth that spoke great things, whose look was more stout than its fellows.   I saw, and the same horn made war with the saints, and prevailed against them,  until the ancient of days came, and judgment was given to the saints of the Most High, and the time came that the saints possessed the kingdom.   “Thus he said, ‘The fourth animal will be a fourth kingdom on earth, which will be different than all the kingdoms, and will devour the whole earth, and will tread it down, and break it in pieces.   As for the ten horns, ten kings will arise out of this kingdom. Another will arise after them; and he will be different than the former, and he will put down three kings.   He will speak words against the Most High, and will wear out the saints of the Most High. He will plan to change the times and the law; and they will be given into his hand until a time and times and half a time.

“‘But the judgment will be set, and they will take away his dominion, to consume and to destroy it to the end.   The kingdom and the dominion, and the greatness of the kingdoms under the whole sky, will be given to the people of the saints of the Most High. His kingdom is an everlasting kingdom, and all dominions will serve and obey him.’  “Here is the end of the matter. As for me, Daniel, my thoughts much troubled me, and my face was changed in me; but I kept the matter in my heart.” 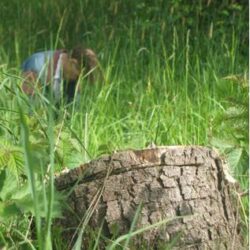 At the end of the days I, Nebuchadnezzar, lifted up my eyes to heaven, and my understanding returned to me, and I blessed the Most High, and I praised and honored him who lives forever; for his dominion is an everlasting dominion, and his kingdom from generation to generation.  All the inhabitants of the earth are reputed as nothing; and he does according to his will in the army of heaven, and among the inhabitants of the earth; and no one can stop his hand, or ask him, “What are you doing?”   At the same time my understanding returned to me; and for the glory of my kingdom, my majesty and brightness returned to me. My counselors and my lords sought me; and I was established in my kingdom, and excellent greatness was added to me.  Now I, Nebuchadnezzar, praise and extol and honor the King of heaven; for all his works are truth, and his ways justice; and those who walk in pride he is able to abase. Daniel 4:34-37

“Behold, there was another animal, a second, like a bear. It was raised up on one side, and three ribs were in its mouth between its teeth. They said this to it: ‘Arise! Devour much flesh!’

Then king Darius wrote to all the peoples, nations, and languages, who dwell in all the earth: “Peace be multiplied to you.  “I make a decree that in all the dominion of my kingdom men tremble and fear before the God of Daniel; “for he is the living God, and steadfast forever. His kingdom is that which will not be destroyed. His dominion will be even to the end.  He delivers and rescues. He works signs and wonders in heaven and in earth, who has delivered Daniel from the power of the lions.”  Daniel 6:25-27

“After this I saw, and behold, another, like a leopard, which had on its back four wings of a bird. The animal also had four heads; and dominion was given to it. 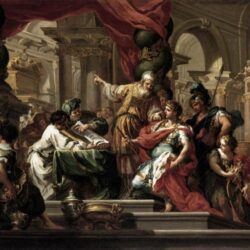 And the rough goat is the king of Grecia: and the great horn that is between his eyes is the first king.

Son of Man
Judge the World in Righteousness