Then the presidents and the local governors sought to find occasion against Daniel as touching the kingdom; but they could find no occasion or fault, because he was faithful. There wasn’t any error or fault found in him.  Then these men said, “We won’t find any occasion against this Daniel, unless we find it against him concerning the law of his God.”

Then these presidents and local governors assembled together to the king, and said thus to him, “King Darius, live forever!  All the presidents of the kingdom, the deputies and the local governors, the counselors and the governors, have consulted together to establish a royal statute, and to make a strong decree, that whoever asks a petition of any god or man for thirty days, except of you, O king, he shall be cast into the den of lions.  Now, O king, establish the decree, and sign the writing, that it not be changed, according to the law of the Medes and Persians, which doesn’t alter.”  Therefore king Darius signed the writing and the decree.

When Daniel knew that the writing was signed, he went into his house (now his windows were open in his room toward Jerusalem) and he kneeled on his knees three times a day, and prayed, and gave thanks before his God, as he did before.  Then these men assembled together, and found Daniel making petition and supplication before his God.  Then they came near, and spoke before the king concerning the king’s decree: “Haven’t you signed a decree that every man who makes a petition to any god or man within thirty days, except to you, O king, shall be cast into the den of lions?” The king answered, “This thing is true, according to the law of the Medes and Persians, which doesn’t alter.”  Then they answered and said before the king, “That Daniel, who is of the children of the captivity of Judah, doesn’t respect you, O king, nor the decree that you have signed, but makes his petition three times a day.”  Then the king, when he heard these words, was very displeased, and set his heart on Daniel to deliver him; and he labored until the going down of the sun to rescue him.  Then these men assembled together to the king, and said to the king, “Know, O king, that it is a law of the Medes and Persians, that no decree nor statute which the king establishes may be changed.” 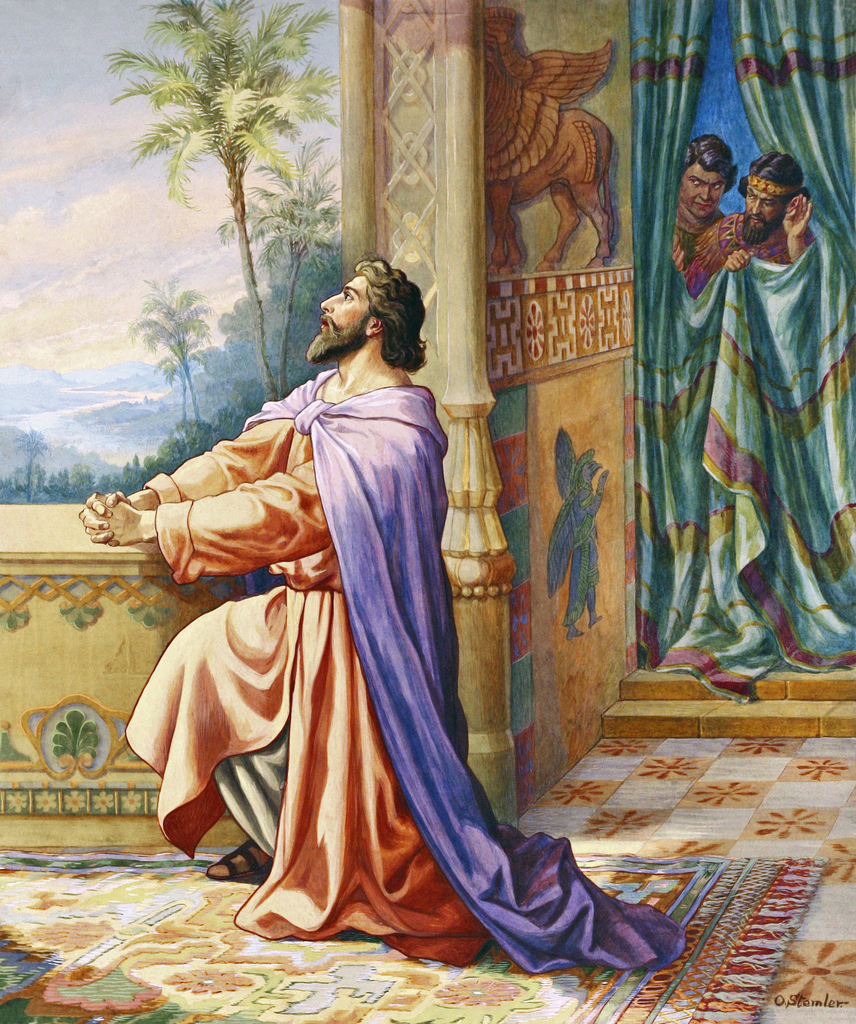 Then the king commanded, and they brought Daniel, and cast him into the den of lions. The king spoke and said to Daniel, “Your God whom you serve continually, he will deliver you.”   A stone was brought, and laid on the mouth of the den; and the king sealed it with his own signet, and with the signet of his lords; that nothing might be changed concerning Daniel.   Then the king went to his palace, and passed the night fasting. No musical instruments were brought before him; and his sleep fled from him.   Then the king arose very early in the morning, and went in haste to the den of lions.   When he came near to the den to Daniel, he cried with a troubled voice. The king spoke and said to Daniel, “Daniel, servant of the living God, is your God, whom you serve continually, able to deliver you from the lions?”

Then Daniel said to the king, “O king, live forever!  My God has sent his angel, and has shut the lions’ mouths, and they have not hurt me; because as before him innocence was found in me; and also before you, O king, I have done no harm.”  Then the king was exceedingly glad, and commanded that they should take Daniel up out of the den. So Daniel was taken up out of the den, and no kind of harm was found on him, because he had trusted in his God.  The king commanded, and they brought those men who had accused Daniel, and they cast them into the den of lions, them, their children, and their wives; and the lions mauled them, and broke all their bones in pieces, before they came to the bottom of the den.

Then king Darius wrote to all the peoples, nations, and languages, who dwell in all the earth: “Peace be multiplied to you.  “I make a decree that in all the dominion of my kingdom men tremble and fear before the God of Daniel; “for he is the living God, and steadfast forever. His kingdom is that which will not be destroyed. His dominion will be even to the end.   He delivers and rescues. He works signs and wonders in heaven and in earth, who has delivered Daniel from the power of the lions.”   So this Daniel prospered in the reign of Darius, and in the reign of Cyrus the Persian. 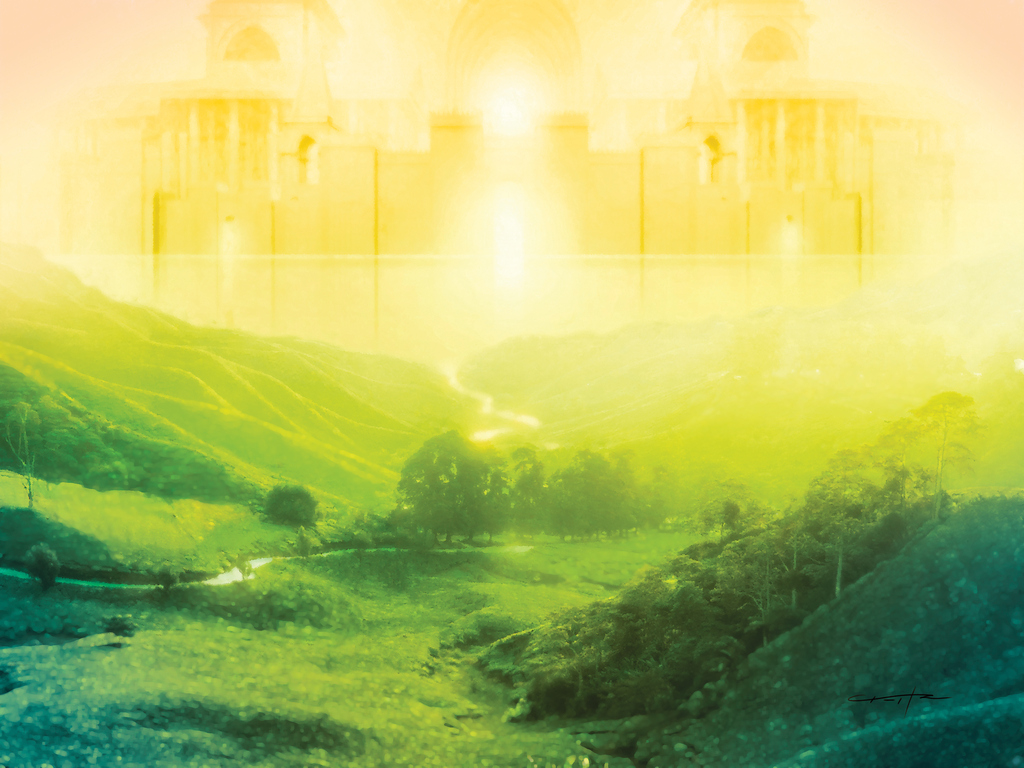 Lord, how long will you look on? Rescue my soul from their destruction, my precious life from the lions.  I will give you thanks in the great assembly. I will praise you among many people. Psalms 35:17,18

Listen to the petitions of your servant, and of your people Israel, when they pray toward this place. Yes, hear from your dwelling place, even from heaven; and when you hear, forgive.  2 Chronicles 6:21

But as for me, in the abundance of your loving kindness I will come into your house. I will bow toward your holy temple in reverence of you.  Lead me, Yahweh, in your righteousness because of my enemies. Make your way straight before my face.  Psalms 5:7,8

And Jehoshaphat stood in the congregation of Judah and Jerusalem, in the house of the LORD, before the new court,  And said, O LORD God of our fathers, art not thou God in heaven? and rulest not thou over all the kingdoms of the heathen? and in thine hand is there not power and might, so that none is able to withstand thee?  Art not thou our God, who didst drive out the inhabitants of this land before thy people Israel, and gavest it to the seed of Abraham thy friend for ever? And they dwelt therein, and have built thee a sanctuary therein for thy name, saying,  If, when evil cometh upon us, as the sword, judgment, or pestilence, or famine, we stand before this house, and in thy presence, (for thy name is in this house,) and cry unto thee in our affliction, then thou wilt hear and help.  2 Chronicles 20:5-9

But don’t be far off, Yahweh. You are my help: hurry to help me.  Deliver my soul from the sword, my precious life from the power of the dog.  Save me from the lion’s mouth! Yes, from the horns of the wild oxen, you have answered me.  I will declare your name to my brothers. Among the assembly, I will praise you.  Psalms 22:19-22

At my first defense, no one came to help me, but all left me. May it not be held against them.  But the Lord stood by me, and strengthened me, that through me the message might be fully proclaimed, and that all the Gentiles might hear; and I was delivered out of the mouth of the lion.  And the Lord will deliver me from every evil work, and will preserve me for his heavenly Kingdom; to whom be the glory forever and ever. Amen.  2 Timothy 4:16-18

What more shall I say? For the time would fail me if I told of Gideon, Barak, Samson, Jephthah, David, Samuel, and the prophets;  who, through faith subdued kingdoms, worked out righteousness, obtained promises, stopped the mouths of lions, quenched the power of fire, escaped the edge of the sword, from weakness were made strong, grew mighty in war, and caused foreign armies to flee.  Hebrews 11:32-34