At that time Berodach Baladan the son of Baladan, king of Babylon, sent letters and a present to Hezekiah; for he had heard that Hezekiah had been sick.  Hezekiah listened to them, and showed them all the storehouse of his precious things, the silver, the gold, the spices, and the precious oil, and the house of his armor, and all that was found in his treasures. There was nothing in his house, or in all his dominion, that Hezekiah didn’t show them.  Then Isaiah the prophet came to king Hezekiah, and said to him, “What did these men say? From where did they come to you?” Hezekiah said, “They have come from a far country, even from Babylon.”   He said, “What have they seen in your house?” Hezekiah answered, “They have seen all that is in my house. There is nothing among my treasures that I have not shown them.”  Isaiah said to Hezekiah, “Hear Yahweh’s word.  ‘Behold, the days come that all that is in your house, and that which your fathers have laid up in store to this day, will be carried to Babylon. Nothing will be left,’ says Yahweh.  ‘They will take away some of your sons who will issue from you, whom you will father; and they will be eunuchs in the palace of the king of Babylon.’”  Then Hezekiah said to Isaiah, “Yahweh’s word which you have spoken is good.” He said moreover, “Isn’t it so, if peace and truth will be in my days?”  Now the rest of the acts of Hezekiah, and all his might, and how he made the pool, and the conduit, and brought water into the city, aren’t they written in the book of the chronicles of the kings of Judah?  Hezekiah slept with his fathers, and Manasseh his son reigned in his place.  2 Kings 20:12-21

At that time,” says Yahweh, “I will be the God of all the families of Israel, and they will be my people.”  Yahweh says, “The people who survive the sword found favor in the wilderness; even Israel, when I went to cause him to rest.”  Yahweh appeared of old to me, saying, “Yes, I have loved you with an everlasting love. Therefore I have drawn you with loving kindness.  I will build you again, and you will be built, O virgin of Israel. You will again be adorned with your tambourines, and will go out in the dances of those who make merry.  Again you will plant vineyards on the mountains of Samaria. The planters will plant, and will enjoy its fruit.  For there will be a day that the watchmen on the hills of Ephraim cry, ‘Arise! Let’s go up to Zion to Yahweh our God.’”  For Yahweh says, “Sing with gladness for Jacob, and shout for the chief of the nations. Publish, praise, and say, ‘Yahweh, save your people, the remnant of Israel!’  Behold, I will bring them from the north country, and gather them from the uttermost parts of the earth, along with the blind and the lame, the woman with child and her who travails with child together. They will return as a great company.  They will come with weeping. I will lead them with petitions. I will cause them to walk by rivers of waters, in a straight way in which they won’t stumble; for I am a father to Israel. Ephraim is my firstborn.  “Hear Yahweh’s word, you nations, and declare it in the distant islands. Say, ‘He who scattered Israel will gather him, and keep him, as a shepherd does his flock.’  For Yahweh has ransomed Jacob, and redeemed him from the hand of him who was stronger than he. They will come and sing in the height of Zion, and will flow to the goodness of Yahweh, to the grain, to the new wine, to the oil, and to the young of the flock and of the herd. Their soul will be as a watered garden. They will not sorrow any more at all.  Then the virgin will rejoice in the dance; the young men and the old together; for I will turn their mourning into joy, and will comfort them, and make them rejoice from their sorrow.  I will satiate the soul of the priests with fatness, and my people will be satisfied with my goodness,” says Yahweh.  Yahweh says: “A voice is heard in Ramah, lamentation and bitter weeping, Rachel weeping for her children. She refuses to be comforted for her children, because they are no more.”  Yahweh says: “Refrain your voice from weeping, and your eyes from tears; for your work will be rewarded,” says Yahweh. “They will come again from the land of the enemy. There is hope for your latter end,” says Yahweh. “Your children will come again to their own territory.   Jeremiah 31:1-17

But if you will not hear it, my soul will weep in secret for your pride. My eye will weep bitterly, and run down with tears, because Yahweh’s flock has been taken captive.  Jeremiah 13:17

At that time the servants of Nebuchadnezzar king of Babylon came up against Jerusalem, and the city was besieged.   And Nebuchadnezzar king of Babylon came against the city, and his servants did besiege it.  And Jehoiachin the king of Judah went out to the king of Babylon, he, and his mother, and his servants, and his princes, and his officers: and the king of Babylon took him in the eighth year of his reign.  And he carried out thence all the treasures of the house of the LORD, and the treasures of the king’s house, and cut in pieces all the vessels of gold which Solomon king of Israel had made in the temple of the LORD, as the LORD had said.  And he carried away all Jerusalem, and all the princes, and all the mighty men of valour, even ten thousand captives, and all the craftsmen and smiths: none remained, save the poorest sort of the people of the land.  And he carried away Jehoiachin to Babylon, and the king’s mother, and the king’s wives, and his officers, and the mighty of the land, those carried he into captivity from Jerusalem to Babylon.  And all the men of might, even seven thousand, and craftsmen and smiths a thousand, all that were strong and apt for war, even them the king of Babylon brought captive to Babylon.  And the king of Babylon made Mattaniah his father’s brother king in his stead, and changed his name to Zedekiah.  Zedekiah was twenty and one years old when he began to reign, and he reigned eleven years in Jerusalem. And his mother’s name was Hamutal, the daughter of Jeremiah of Libnah.   And he did that which was evil in the sight of the LORD, according to all that Jehoiakim had done.  For through the anger of the LORD it came to pass in Jerusalem and Judah, until he had cast them out from his presence, that Zedekiah rebelled against the king of Babylon.  2 Kings 24:10-20

“For, behold, in those days, and in that time, when I restore the fortunes of Judah and Jerusalem, I will gather all nations, and will bring them down into the valley of Jehoshaphat; and I will execute judgment on them there for my people, and for my heritage, Israel, whom they have scattered among the nations. They have divided my land, and have cast lots for my people, and have given a boy for a prostitute, and sold a girl for wine, that they may drink. “Yes, and what are you to me, Tyre, and Sidon, and all the regions of Philistia? Will you repay me? And if you repay me, I will swiftly and speedily return your repayment on your own head.  Because you have taken my silver and my gold, and have carried my finest treasures into your temples, and have sold the children of Judah and the children of Jerusalem to the sons of the Greeks, that you may remove them far from their border.  Behold, I will stir them up out of the place where you have sold them, and will return your repayment on your own head; and I will sell your sons and your daughters into the hands of the children of Judah, and they will sell them to the men of Sheba, to a faraway nation, for Yahweh has spoken it.”  Joel 3:1-8

Therefore Yahweh says: ‘Your wife shall be a prostitute in the city, and your sons and your daughters shall fall by the sword, and your land shall be divided by line; and you yourself shall die in a land that is unclean, and Israel shall surely be led away captive out of his land.’”  Amos 7:17

“Look among the nations, watch, and wonder marvelously; for I am working a work in your days, which you will not believe though it is told you.  For, behold, I raise up the Chaldeans, that bitter and hasty nation, that march through the width of the earth, to possess dwelling places that are not theirs.  They are feared and dreaded. Their judgment and their dignity proceed from themselves.  Their horses also are swifter than leopards, and are more fierce than the evening wolves. Their horsemen press proudly on. Yes, their horsemen come from afar. They fly as an eagle that hurries to devour.  All of them come for violence. Their hordes face the desert. He gathers prisoners like sand.  Yes, he scoffs at kings, and princes are a derision to him. He laughs at every stronghold, for he builds up an earthen ramp, and takes it. Then he sweeps by like the wind, and goes on. He is indeed guilty, whose strength is his god.”  Habakkuk 1:5-11 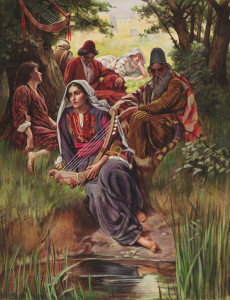 By the rivers of Babylon, there we sat down, yea, we wept, when we remembered Zion.  We hanged our harps upon the willows in the midst thereof.  For there they that carried us away captive required of us a song; and they that wasted us required of us mirth, saying, Sing us one of the songs of Zion.   How shall we sing the LORD’S song in a strange land?  If I forget thee, O Jerusalem, let my right hand forget her cunning.  If I do not remember thee, let my tongue cleave to the roof of my mouth; if I prefer not Jerusalem above my chief joy.  Remember, O LORD, the children of Edom in the day of Jerusalem; who said, Rase it, rase it, even to the foundation thereof.  O daughter of Babylon, who art to be destroyed; happy shall he be, that rewardeth thee as thou hast served us. Happy shall he be, that taketh and dasheth thy little ones against the stones.  Psalms 137

‘Behold, the days are coming when all that is in your house, and that which your fathers have stored up until today, will be carried to Babylon. Nothing will be left,’ says Yahweh.  ‘They will take away your sons who will issue from you, whom you shall father, and they will be eunuchs in the king of Babylon’s palace.’”  Then Hezekiah said to Isaiah, “Yahweh’s word which you have spoken is good.” He said moreover, “For there will be peace and truth in my days.”  Isaiah 39:6-8