Yahweh will bring a nation against you from far, from the end of the earth, as the eagle flies; a nation whose language you will not understand;  a nation of fierce facial expressions, that doesn’t respect the elderly, nor show favor to the young, and they will eat the fruit of your livestock, and the fruit of your ground, until you are destroyed. They also won’t leave you grain, new wine, or oil, the increase of your livestock, or the young of your flock, until they have caused you to perish.  They will besiege you in all your gates, until your high and fortified walls come down, in which you trusted, throughout all your land. They will besiege you in all your gates throughout all your land, which Yahweh your God has given you.  Deuteronomy 28:49-52

For I will proclaim the name of Yahweh: Ascribe you greatness to our God. The Rock, his work is perfect; For all his ways are justice: A God of faithfulness and without iniquity, Just and right is he…. But Jeshurun grew fat, and kicked: You have grown fat, you are grown thick, you are become sleek; Then he forsook God who made him, Lightly esteemed the Rock of his salvation…. Of the Rock that became your father, you are unmindful, Have forgotten God who gave you birth. …..For they are a nation void of counsel, There is no understanding in them.  Oh that they were wise, that they understood this, That they would consider their latter end!  How should one chase a thousand, Two put ten thousand to flight, Except their Rock had sold them, Yahweh had delivered them up?  For their rock is not as our Rock, Even our enemies themselves being judges.
Deuteronomy 32:3,4,15,18,31

Yahweh sold them into the hand of Jabin king of Canaan, who reigned in Hazor; the captain of whose army was Sisera, who lived in Harosheth of the Gentiles.  Judges 4:2

He gave them into the hand of the nations. Those who hated them ruled over them.  Their enemies also oppressed them. They were brought into subjection under their hand.  Psalms 106:41,42

Who gave Jacob as plunder, and Israel to the robbers? Didn’t Yahweh, he against whom we have sinned? For they would not walk in his ways, and they disobeyed his law.  Isaiah 42:24 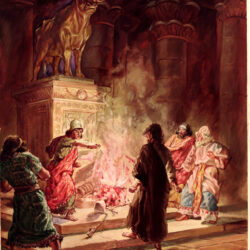 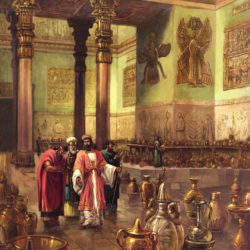 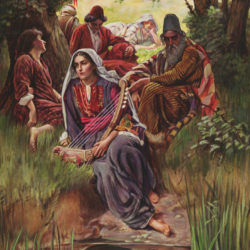 How shall we sing?